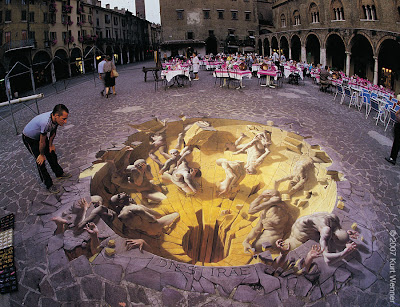 Julian Beever, aka the Pavement Picasso, is a well-known international artist. He is known for his gargantuan 3D chalk pavement sketching. He uses a type of projection called anamorphism, which from the RIGHT angle his drawings could appear only 3ft tall, but in actuality they could be up to 30 plus ft tall! He admits his chalk art (which could take up to a few days to complete) only stands as long as the elements allow. This mean if it rains all the hard work he put in on his chalk creation is lost. Does that stop Julian? OF COURSE NOT!

Julian also gets criticized because many complain his chalk art is graffiti. Julian stated in one interview, “My art is for anybody, it’s for people who wouldn’t go into an art gallery. It’s art for the people. Art shouldn’t be locked away in galleries and libraries and books. Art should be for everybody and not just art boffins, historians, and so-called experts.” All quotes are from:http://www.timotca.org/demo4/biography.html

Here a few other photos I gathered from http://www.google.com/imghp?hl=en&tab=wi