- August 23, 2011
Apathy is a rapper from Connecticut, he is a member DemiGodz, Get Busy Committee, & Army of the Pharaohs. The record industry has had its rounds with Apathy. Once signed to Atlantic Records he decided to leave the label due to "CREATIVE DIFFERENCES". Apparently Apathy did not want to go in the same direction as Atlantic with his music. Today August 23, 2011 he released his 3rd LP Honkey Kong. production & features the likes of Evidence, Mad Lion, General Steele (Smif-N-Wesson), DJ Premier & others. 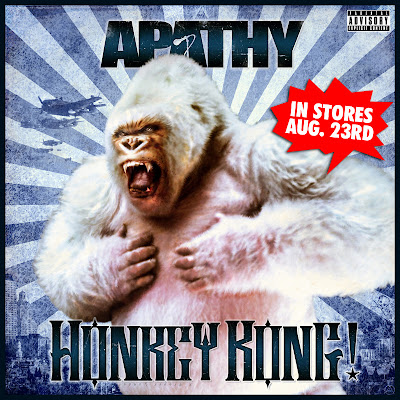 XXL Magazine wrote, "Honkey Kong paints a good picture of the impressive output Apathy is capable of in 2011." Check it I will be!!
Ear Hustlers and Music Makers UnderGround Hip Hop