The Ancestor of the Modern Day Synthesizer 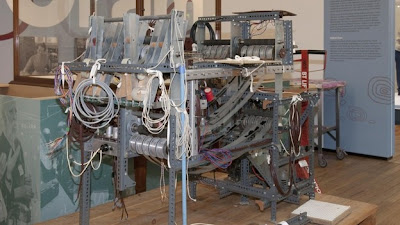 The Science Museum in London just acquired the ORAMICs Machine; it will be on display from July 29, 2011 to December 1st, 2011. The contraption is considered the ancestor of the modern day synthesizer, which uses a draw sound technique. {Oram's composition machine consisted of a large rectangular metal frame, providing a table-like surface traversed by ten synchronized strips of clear, sprocketed 35mm film. The musician drew shapes on the film to create a mask, which modulated the light received by photocells. Although the output from the machine was monophonic, the sounds could be added to multitrack tapes to provide more texture.} WIKIPEDIA
Daphne Oram was the machine’s namesake & inventor. Apparently the idea was born in the 1950s when Oram was employed at the BBC Radiophonic Workshop, in the sound-effects department. {"For a whole decade, they had been making electronic music by recording natural sounds and splicing them together using reel-to-reel tape machines," Boon says. "It was a very difficult way of making music. That's why she set about trying to make a machine which was specifically designed to make electronic sounds."} NPR.ORG 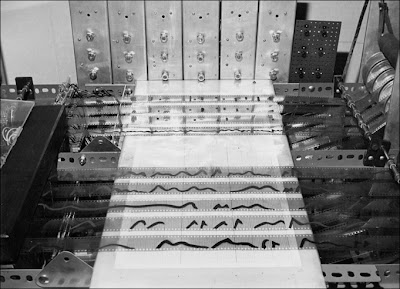 The museum believes it has been about 25 years since the machine was activated and {decided early on that, because Oram's machine is unique and irreplaceable, to try to run it would be to compromise its historic value.} Synthesizers have come a long way. Check out this bad boy I must have!