Saber In the Sky

- October 13, 2011
“LA’s Mural Moratorium” has been making world news recently. {Judy Baca, executive director of the nonprofit Social and Public Art Resource Center, commented, "The graffiti made a wonderful statement: They can't write on walls. The only place to express themselves is the sky."} LA WEEKLY

These sky tags are a clever production started by the legendary SABER ONE in protest of making street art murals illegal. He has rallied several big names in the world of graffiti to fight the cause. It’s the seemingly endless war against graffiti: ART vs CRIME. LA City Attorney Carmen Trutanich, appears to be a leader in eradicating street art murals. After serving over a month in jail, REVOK1 another infamous writer moved to Detroit because of the conflict. {"L.A. City Attorney [Carmen Trutanich] told me, told my lawyer, that if I ever paint another mural in Los Angeles — even if [Los Angeles County Museum of Art] commissions me to do the side of their building — they have a civil lawsuit ready to go, for upwards of hundreds of thousands of dollars," he says.
What has come to be known as the "L.A. mural moratorium" began with a late-1990s lawsuit against the city by Regency Outdoor Advertising, which owns many of the billboards on the Sunset Strip. Regency said the city's sign code allowed restrictions on street advertising — while the Cultural Affairs Commission handed out street art permits like candy — thus violating the First Amendment. A federal judge sided with Regency. Several state courts came to similar conclusions: It's a violation of free speech to have a sign code that sets out lax rules for fine art murals, even on private property, while banning or restricting billboards and outdoor advertising.} LA WEEKLY 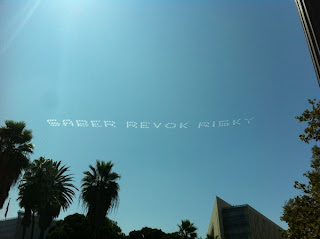 I just can’t wrap my head around it. Los Angeles once known as the mural capital of the world, is now trying to make fine art murals illegal? Support graffiti as an art not a crime & sign this PETITION to end the LA Mural Moratorium. Big up to Saber not only as an artistic genius, but as a fine example of activism for the sake of art.
For more info check out these sites:
NBC LA SABERONE.COM END THE MURAL MORATORIUM
ARTistic Genius Brain Candy Definition History Inspiration Legalize It News Out The Box Photography PHotos Quotes Street Art The Writing's On The wall UnderGround Hip Hop