- November 16, 2011
In a time where the city of Los Angeles is fighting to ban street art (LA's Mural Moratorium) one of street arts biggest advocates was posted on the corner of Le Brea & 2nd St painting and pasting his message on the wall. It was none other than Shepard Fairey. Many were expecting Five-O to mob up on him and cuff him on the spot. 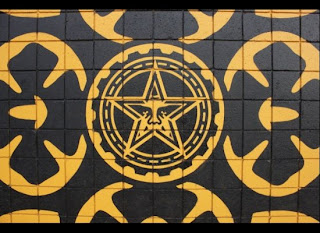 {"This is a legal wall," Fairey explained. "I used to put stuff illegally on the roof of this place all the time. Then all of a sudden they stopped cleaning it off."} LAIST.COM 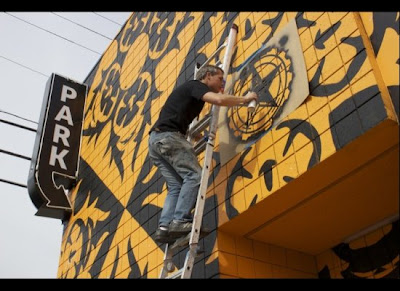 Why?! Because they liked it!! The “they” is Madison Marquette building company. They are the company behind many "modern lifestyle centers," aka fancy outdoor malls. Fairey was prodded with questions if he was getting paid for the mural, he retorted with the fact that he was just covering the paint. 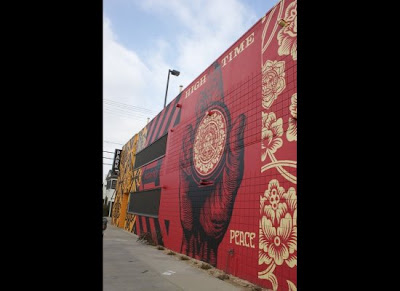 {"Usually when I get a legal wall it just means I don't have to look over my shoulder for the police," he explained. "For me the important thing is that the work is in public and it's free for the audience. For years, I couldn't get my work out in public any other way than to just do it illegally....It's really great to have a legal wall." "They were really worried about any of the content being controversial," Fairey said of his negotiations with the building owners. "I kept true to my own work...and went with pro nature, pro peace." He showed me his graphic design prints for the mural: a hand with a watch embedded in it, reading "High Time for Peace," and a monkey pod tree adorned with peace lanterns and leaves lapping at the familiar face of The Giant. 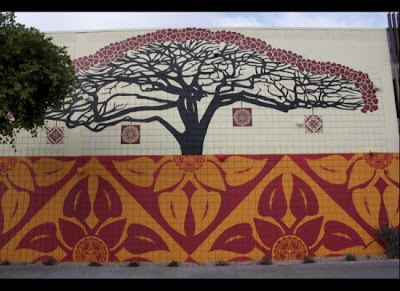 Reflecting on his choice to accept the free wall despite its regulations, Fairey said, "The great thing about the illegal stuff is that there's no bureaucracy, you know? Say what you want to say. But the downside is the impermanence. This will stay up for theoretically, years." Fairey's mural has all the beauty, energy, and silent strength his work always possesses and this message just happens to be one that forward-thinking corporate clients and the 99 percent can both embrace.}LAWEEKLY.COM 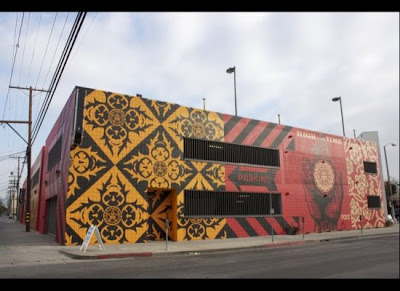 Pictures obtained from this DOPE ARTICLE .
ARTistic Genius Graffiti History Inspiration Legalize It News Out The Box Photography PHotos Places You MUST Go Street Art The Writing's On The wall UnderGround Hip Hop