{Jeremy Shu-How Lin (born August 23, 1988) is an American professional basketball player with the New York Knicks. In February 2012, he unexpectedly led a winning streak by New York while being promoted to the starting lineup, which generated a global following known as Linsanity.}  JEREMY LIN 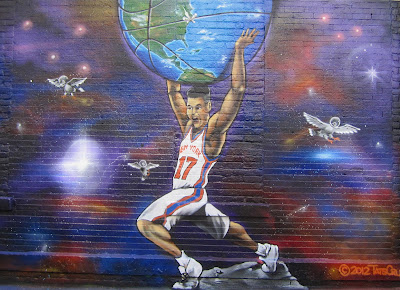 {Graffiti artists Tats Cru have painted a tribute to Knicks phenom Jeremy Lin on the side of a building on 2nd Street and Avenue A in the East Village. The mural, nicknamed “Atlas Plugged,” depicts Jeremy Lin standing atop a mountain, in space, carrying the world above his heads in his hands. Lin is accompanied by pigeons wearing what appear to be helmets, presumably to let them breathe while flying in the cosmos. The mural was commissioned by website ANIMALNewYork, which describes itself as a “daily mix of underground culture.”} CBS

Time Lapse of Jeremy Lin Mural from ANIMALnewyork.com on Vimeo.