Showing posts from August, 2015
Show all

- August 12, 2015
Tecsonic J1 Jumbo One of the largest boxes out there, this guy was made famous by Spike Lee's Do The Right Thing. Although, the one in the movie that Radio Raheem carries around is actually a Prosonic, not a Tecsonic. I can't tell you how many people I have seen saying there Tecsonic is the exact same box as in the movie when they are 3 letters off from being even close. They are the exact same though as far as looks and specs. Another mistake most people make is that it takes 20 D batteries like in the movie. It only takes 10. I have never came across a box that takes more than 10. "D muh fugga, D!" Mine is bigger than yours... #tecsonic #j1jumbo #ghettoblaster #boombox #collection #krylon #cancollector #hiphophoarder #graffiti #bgirl #bboy #hiophop #radioraheem "I said D's muh fugguh!!" A photo posted by @el_phadado on Jul 21, 2015 at 9:56pm PDT
Post a Comment
Read more 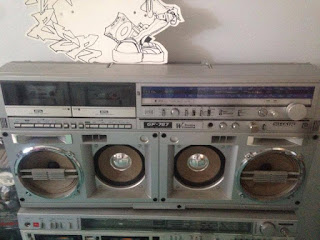 Sharp GF767 This right here is money. This is what some say was the beta version of the GF777. JMJ is sitting on one sideways between Run and Darryl Mac on the back of RUN DMC's first album (don't ever do that!). It had blue grilles and is harder to find than the infamous GF777z. Biggest flaw is the plastic pitted with age. This box sounds better than most...love it.
Post a Comment
Read more 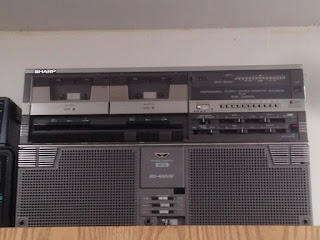 Sharp RD-688AV This is also known as the GF-666, baby brother to the GF-777/767 model which are the must haves for most collectors. Nothing too special about this guy except for a small fact that I am not sure is 100% true. It is the first dual cassette boombox. I had the hard shell carrying case it came in with the mic option, not sure if that was standard issue. Has all the cool features like APLD so you can skip to the next song on cassette. This one belonged to a school and is in perfect condition aside from the teacher that decided to scratch the district initials into the top. It is a mid size box, 13"H x 21"W....get one!
Post a Comment
Read more 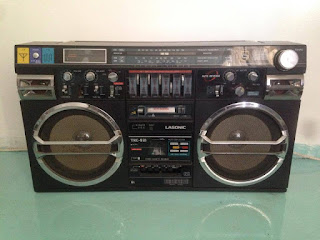 I figured I would share some box knowledge once a week from now on. We'll start here. Laconic TRC-931 2nd Gen This is a second gen TRC-931. First gen has the VU meter on the right and the 3rd gen has rounded corners. The current Lasonic i931 that you see on every Disney show and lame commercial is a remake of the 3rd gen design, the wackest one in my opinion. This is the little brother to the  TRC-975. This has Tape A as a car deck style and Tape B as a standard deck. Most common issue with these is the Function knob and missing buttons on the Tape B, mine is missing all of them:(. The Function knob breaks so people think the box is broken but probably stuck on Aux. You can pop them open and change the function(next to impossible to repair) and leave it on whatever you use (hopefully cassette;). Takes 10 D's. It's generally a must have for most collectors and is a decent mid size for larger boxes.   Can't google this knowledge kids!!
Post a Comment
Read more 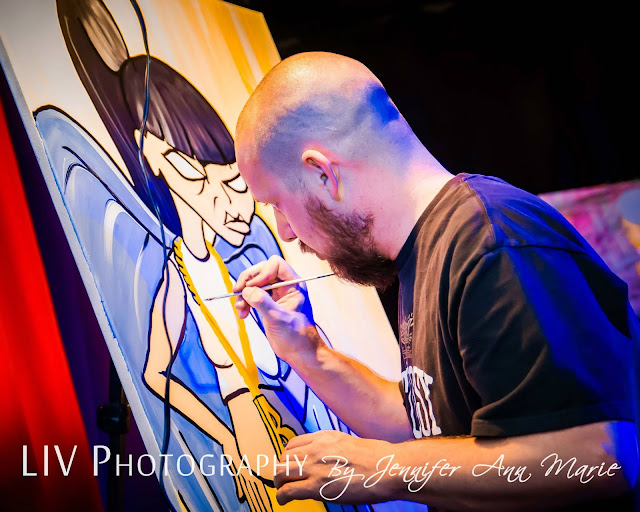