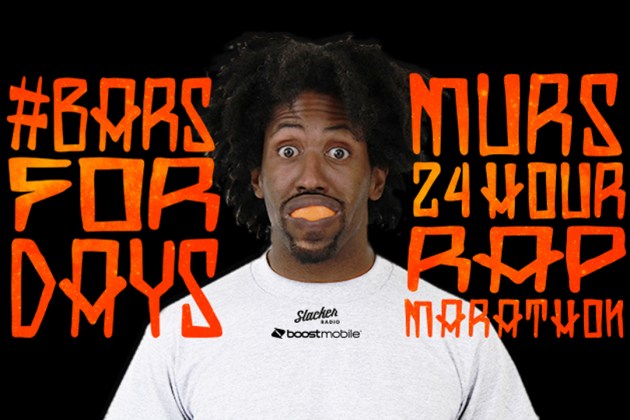 {West Coast rap veteran Murs began his heroic crusade to do the unthinkable on Wednesday (Oct. 12): break the Guinness World Record for the longest rap marathon by rapping for over 24 hours straight, promoting Boost Mobile’s Unlimited Music Streaming, featuring Slacker Radio. At 9 a.m. PST on Wednesday, Boost Mobile’s Where You At LA? host embarked upon his quest, which included a rap karaoke tour de force the likes of which we’ve literally never seen before.

It’s fitting that Murs would try to make rap history by functioning as a living, breathing museum for hip-hop. Over the course of a little more than 24 hours, Murs raps his way through just about every mid-1980s and 1990s rap classic in the book, showcasing an impressive mix of endurance and stylistic malleability in the process.

Throughout the marathon, the seemingly inexhaustible Murs effortlessly mimicked legendary rappers as he performed their timeless songs without missing a beat. When the laid-back instrumental for A Tribe Called Quest’s “Bonita Applebum” begins, he takes on the nasally rasp of the group’s front man Q-Tip. When the beat for Public Enemy’s “Fight the Power” kicks off, he assumes Chuck D’s husky, authoritative thump of a voice.

Of course, fans will also recognize the songs Murs performs from his own catalog as tracks like “L.A.” and “God’s Work” boom at different points during the marathon. Murs was as impressive as he was probably exhausted, but the Cali stalwart pressed on as he rapped his way into hip-hop immortality.} http://www.xxlmag.com/news/2016
GUINNESS WORLD RECORD I LOVE HIP HOP LONGEST RAP MARATHON mc MURS rapper UnderGround Hip Hop WORLD NEWS world record XXL MAGAZINE