THE WORLD HAS NO EYEDEA

{CALGARY — On October 16th, 2010, the underground hip-hop community was shaken to its core when Michael (Mikey) Larsen, better known by his stage names Eyedea (of Eyedea and Abilities), and Oliver Heart, died unexpectedly. Eyedea was an enigma of the hip-hop world. He was more than just a rapper. He was a poet, b-boy, and a master of spontaneity. Eyedea won three different freestyle battle competitions, including 1999 Scribble Jam and the 2000 HBO Blaze Battle where he was offered a contract by Sean (Puffy) Combs. Mikey would turn down the offer and later mocked it on record. This was Mikey Larsen: never afraid to show his true colours at a moment’s notice and never shying away from being true to himself.

After his victories in the battle rap scene he went back to writing and formed a duo with longtime friend DJ Abilities. The duo released their first of three albums, First Born, under the Rhymesayers label, owned by fellow Minnesota native, and friend Slug of the long-standing hip-hop group Atmosphere. From there, he took to a solo project, The Many Faces of Oliver Heart, under the alias Oliver Heart. He was constantly creating and developing his style through multiple collaborations and releases.

To commemorate the life of such a diverse and talented artist, the documentary The World Has No Eyedea came to life. Larsen’s best friend and mother, Kathy Averill, will be hosting the two Alberta screenings of the documentary as a part of a memorial tribute tour. The idea to have a memorial show in Alberta was cultivated by Edmonton-based M.C. and promoter for The Forge, Justin Jreds Sturek, who has built a friendship with Averill since Larsen’s passing, based on the impact the music has had on him over the years. “Justin and I had been talking about the memorial show for a long time,” Averill recalls.} READ MORE HERE 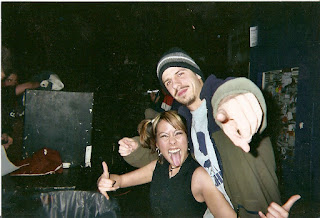