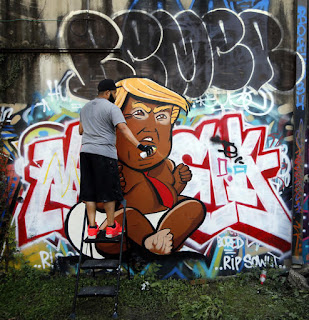 {the recent Go Paint Day at The Fabrication Yard was a welcome relief for graffiti artists eager to show Dallas: We aren't who you think we are.

"We need more places like this," said Melissa Gannaway, a frequent visitor to The Fabrication Yard in Trinity Groves.

Another artist at the event, who would only provide his tagger name, "Lefts," said street art is his form of worship and the best outlet he knows to relieve stress.

"This is church for me," he said. "This is my way of getting all my emotions inside and putting them out."

"The culture of graffiti is evolving and ever-changing," Garnett said. "Graffiti is something that has been around since the beginning of human communication."

The artists, themselves, have changed, too. Whereas they once belonged to gangs and used tags to stake claims to turf, now taggers join crews.

"This culture means a lot to me," he said. "We need spaces where people can see this art."

Even if some crews do still tag illegally, Garnett said, most do not, and they're far from a gang.

But don't take a tagger's word for it: Police and a study by researchers at the University of Texas at Dallas agree gangs and graffiti don't mix like they once did.